A recurring theme among the detractors of President Obama has been his reliance on a teleprompter. Anyone who spends time on the internet has seen it on an almost daily basis.

In the minds of some this apparently is an indicator of a lack of intelligence, as ridiculous as that is when speaking about a Harvard graduate, editor of The Law Review, and author of 2 books.

One of the bloggers on the far-right, John Hinderaker, who writes for Power Line, said this about a recent speech by President Obama in which he mis-pronounced the word “Orion.”

“Everyone knows that Barack Obama is lost without his teleprompter, but his latest blunder, courtesy of the Milwaukee Journal Sentinel, via the Corner, suggests that the teleprompter may not be enough unless it includes phonetic spellings.

So evidently we have to add astronomy to history and economics as subjects of which Obama is remarkably ignorant. I’m beginning to fear that our President has below-average knowledge of the world. Not for a President, but for a middle-aged American.”

Just as a point of reference, this is the same Mr. Hinderaker who wrote this shortly after last year’s election:

“Obama thinks he is a good talker, but he is often undisciplined when he speaks. He needs to understand that as President, his words will be scrutinized and will have impact whether he intends it or not. In this regard, President Bush is an excellent model; Obama should take a lesson from his example. Bush never gets sloppy when he is speaking publicly. He chooses his words with care and precision, which is why his style sometimes seems halting. In the eight years he has been President, it is remarkable how few gaffes or verbal blunders he has committed. If Obama doesn’t raise his standards, he will exceed Bush’s total before he is inaugurated.”

But you know, the more I think about it, the more I tend to agree with Hinderaker and others. Only a complete idiot would have to rely on a teleprompter when speaking to the country. Right, Senator McCain? 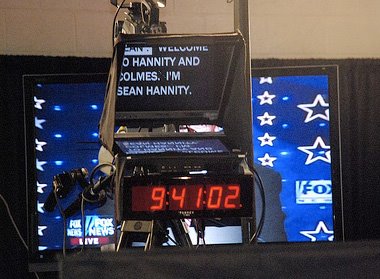 Oh well, I guess it’s back to the birth certificate nonsense.