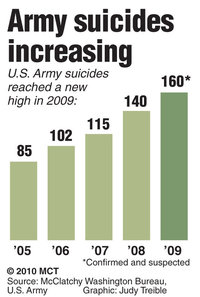 McClatchy has the account today (January 31) of Retired Command Sgt. Maj. Samuel Rhodes and his battle with thoughts of suicide as an example of this ever-increasing problem among active duty soldiers in Iraq and Afghanistan:

“It’s been roughly five years since Rhodes came home from his third tour in Iraq, and despite a highly-decorated 29-year career in the Army, a new book, more than a hundred speaking engagements and praise from the likes of Gen. George Casey, the Army chief of staff, for his efforts in suicide prevention, Rhodes still wrestles with his own demons.

…Rhodes is among a small cadre of senior non-commissioned officers and officers who’re opening up about their journeys back from the brink of suicide — efforts that top military commanders applaud as they battle a suicide epidemic.

…This month, the Defense Department reported that there were 160 reported active-duty Army suicides in 2009, up from 140 in 2008. Of these, 114 have been confirmed, while the cause of death in the remaining 46 remains to be determined. The increase in military suicides includes men between the ages of 18-30, mid-career officers and, increasingly, women.

Adm. Mike Mullen, the chairman of the Joint Chiefs of Staff, and other military leaders have said the increase is likely related to repeated deployments in Iraq and Afghanistan and to the stigma long associated with seeking treatment for mental health problems.

…In response, the Pentagon has poured millions of dollars into new suicide prevention programs and thousands of hours on helping soldiers suffering from depression and post-traumatic stress disorder.”

If I may, the people at the Pentagon are treating the symptoms but not the disease. I can save them those millions of dollars and thousands of hours spent on seeking a solution to this problem with one simple prescription. It’s a great, big dose of  ‘Get the hell out of Iraq and Afghanistan and put an end to this perpetual state of war.’