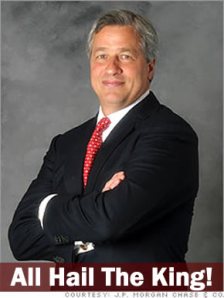 “There are two kinds of bankers to fear.  The first is incompetent and runs a big bank.  This includes such people as Chuck Prince (formerly of Citigroup) and Ken Lewis (Bank of America).  These people run their banks onto the rocks – and end up costing the taxpayer a great deal of money.  But, on the other hand, you can see them coming and, if we ever get the politics of bank regulation straightened out again, work hard to contain the problems they present.

The second type of banker is much more dangerous.  This person understands how to control risk within a massive organization, manage political relationships across the political spectrum, and generate the right kind of public relations.  When all is said and done, this banker runs a big bank and – here’s the danger – makes it even bigger.

Jamie Dimon is by far the most dangerous American banker of this or any other recent generation.”

Following an interview with German newspaper Welt am Sonntag on Sunday, that should be amended to read “the most dangerous man in the world” as Dimon issued this not-so-veiled threat on the possibility of stricter bank regulations:

“When profits fall too sharply then capital will move somewhere else, where there is more money to be earned, for example non-regulated markets. The question is, is that what regulators want?”

“[Dimon] also said the banking industry could do with more influence on politicians.”