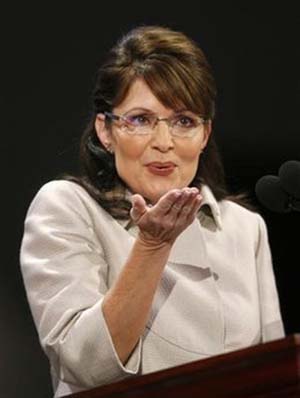 If there is an afterlife, where the deeds done during one’s time on earth are the basis for either reward or punishment, I wouldn’t want to be one John Sidney McCain. His payment for unleashing upon an unsuspecting country the natural disaster known as Sarah Palin will surely be severe, and deservedly so.

To use a comparison to another ongoing national tragedy, Sen. McCain drilled a well in a remote area without any means of shutting off the flow if the worst-case scenario occurred. As is the case in the Gulf of Mexico, the blowout preventer on Palin’s mouth is broken and her ignorance will apparently continue to gush out and pollute our airwaves for years to come.

The latest from the egomaniacal, self-serving, self-aggrandizing, money-grubbing, ‘it’s all about me,’ funeral crashing, camera hound, that is the former half-term Governor of Alaska. The Deepwater Horizon of politics:

“Kentucky Senate candidate Rand Paul is feeling what it is like to be Sarah Palin, the former Republican vice presidential candidate said Sunday, comparing the media’s preoccupation with Paul’s recent statements about the 1964 Civil Rights Act to her own treatment in the press.

Palin said that Paul is seeing firsthand how “gotcha” politics work after the libertarian-leaning Republican spent days on defense spelling out his support for the Civil Rights Act and the government’s role in regulating how private businesses can deal with their customers.

“One thing that we can learn in this lesson that I have learned and Rand Paul is learning now is don’t assume that you can engage in a hypothetical discussion about constitutional impacts with a reporter or a media personality who has an agenda, who may be prejudiced before they even get into the interview in regards to what your answer may be — and then the opportunity that they seize to get you,” Palin told “Fox News Sunday.”

First of all Sarah, I doubt you can spell hypothetical, much less have an iota of an inkling of a clue as to what it means. Stick to simple words for simple minds please. Stuff like ‘You betcha’ and ‘drill, baby, drill.’

Moreover, Rand Paul and Sarah Palin are two of a kind. Whether it’s Paul spouting his views of a make-believe libertarian utopia to his Ayn Rand inspired followers, or Palin in her Tea Party cocoon where dim-witted crowds lap up her inane babblings, both seem to take offense, and run away, when asked to explain and defend their statements. Or in Palin’s case, when confronted with a tough, ruthless, agenda-driven, prejudiced interviewer like Katie Couric, and asked those “gotcha” questions like what newspapers do you read or name a Supreme Court decision.

1 thought on “No BOP for Palin’s Mouth?”