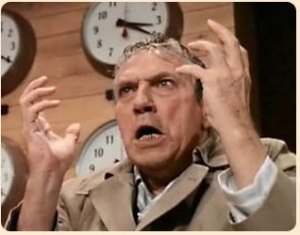 We have a Congress packed with cowards, hypocrites, and fools—on both sides of the aisle. House Democrats have passed a budget that’s not really a budget, and projected a balanced budget that’s not really a balanced budget because it excludes interest payments on the debt. They left out the minor details of how to achieve that lofty goal, depending on recommendations from the debt commission to cover their collective asses and keep them from having to make what could be controversial votes in an election year. Profiles in courage.

That would be the deficit commission packed with Social Security privatizers, some of whom support investing as much as 20% of the SS trust fund in the stock market. Speaker Pelosi, in the interest of openness and transparency, last night sneaked in inserted language in the war funding bill that would allow the House to have an up-or-down vote on the deficit commission’s recommendations in a lame duck session after the November elections. Buck passing and CYA at its finest.

Republican deficit hypocrites, who never saw a spending program they didn’t like when they held power, have now become fiscal conservatives, allegedly. They, along with their lackey Ben Nelson, have blocked the extension of unemployment benefits despite the fact that new jobless claims have hit their highest levels since March, and the unemployment numbers due out today are expected to show an increase from the 9.7% we have now.

Both sides have their collective moistened fingers in the wind which tells them that voters are worried about increasing deficits, so these geniuses look for ways to cut spending, except for the untouchable Defense Department, that is. Wouldn’t want to be accused of being “soft on terror.”. Never mind that the stock market is headed back down, pending new home sales dropped 30% from April to May, credit is still tightening, and many states are facing budget crises that, without federal assistance, could result in the loss of 900,000 more jobs.

Add these to the anticipated rise in unemployment and the prospects of a double-dip recession are increasing by the day. Exactly the wrong time to even be considering spending cuts, unless you want a repeat of 1937. Fools.