September 11, 2001 has been dubbed ‘The Day That Changed America’ and indeed it did. Indeed it did—and not for the better. It changed America from the land of the free and the home of the brave to the land of the increasingly less free and the home of ‘do whatever it takes to keep us safe.’ It changed us from a country governed by the founding principles of due process, equal justice, and the rule of law to a country where indefinite detention without charges or trials are an accepted practice. Where the Executive Branch, aided and abetted by the Judicial Branch, can be exempted from accountability from what were once considered war crimes simply by invoking the vague and all-encompassing claims of “state secrets” and “national security interests.”

These changes were exemplified in a decision by the Ninth Circuit Court of Appeals on Wednesday when it dismissed a suit by five men who allege they were imprisoned and tortured under the Bush administration’s rendition program. The decision was also considered a “major victory” for the Obama administration, who appealed an earlier ruling which said the suit should go forward.

“In a 6-5 ruling issued this afternoon, the 9th Circuit Court of Appeals handed the Obama administration a major victory in its efforts to shield Bush crimes from judicial review, when the court upheld the Obama DOJ’s argument that Bush’s rendition program, used to send victims to be tortured, are “state secrets” and its legality thus cannot be adjudicated by courts.  The Obama DOJ had appealed to the full 9th Circuit from last year’s ruling by a 3-judge panel which rejected the “state secrets” argument and held that it cannot be used as a weapon to shield the Executive Branch from allegations in this case that it broke the law.”

Not that this is any shift in direction. It’s just the latest effort by the current administration to continue, and in some cases expand upon, the policies of the former administration—policies candidate Obama denounced but President Obama embraces:

“Among other policies, the Obama national security team has also authorized the C.I.A. to try to kill a United States citizen suspected of terrorism ties, blocked efforts by detainees in Afghanistan to bring habeas corpus lawsuits challenging the basis for their imprisonment without trial, and continued the C.I.A.’s so-called extraordinary rendition program of prisoner transfers — though the administration has forbidden torture and says it seeks assurances from other countries that detainees will not be mistreated.”

The reaction to the decision from the ACLU:

“This is a sad day not only for the torture victims whose attempt to seek justice has been extinguished, but for all Americans who care about the rule of law and our nation’s reputation in the world. To date, not a single victim of the Bush administration’s torture program has had his day in court. If today’s decision is allowed to stand, the United States will have closed its courtroom doors to torture victims while providing complete immunity to their torturers.”

Andrew Sullivan at The Daily Dish:

“The case yesterday is particularly egregious because it forbade a day in court for torture victims even if only non-classified evidence was used. Think of that for a minute. It shreds any argument that national security is in any way at stake here. It’s definitionally not protection of any state secret if all that is relied upon is evidence that is not secret. And so this doctrine has been invoked by Obama not to protect national security but to protect war criminals from the law. There is no other possible interpretation.

The Bush executive is therefore now a part of the American system of government, a system that increasingly bears no resemblance to the constitutional limits allegedly placed upon it, and with a judiciary so co-opted by the executive it came up with this ruling yesterday. Obama, more than anyone, now bears responsibility for that. We had a chance to draw a line. We had a chance to do the right thing. But Obama has vigorously denied us the chance even for minimal accountability for war crimes that smell to heaven.

And this leviathan moves on, its budget never declining, its reach never lessening, its power now emboldened by the knowledge that this republic will never check it, never inspect it, never hold its miscreants responsible for anything, unless they are wretched scapegoats merely following orders from the unassailable above them.”

To those who would “look forward” and give the Obama administration a pass here, ask yourself a few questions. If it were the Bush administration would you be so lenient? Let’s be very honest. If one administration is guilty of authorizing and condoning war crimes, is not the following administration, as evidenced by its actions, guilty of being an accessory to the commission of war crimes? I don’t see how any other conclusion can be reached.

Andrew Sullivan at The Daily Dish after British Prime Minister David Cameron announced “an inquiry into the alleged collusion of British intelligence officials in the torture of detainees.”

“After July 4, only one country in the Anglo-American alliance is still dedicated to the rule of law and the prosecution of war crimes: the old country. And it has taken a Tory prime minister to do what Barack Obama has not the slightest spine (yet) to tackle here.” 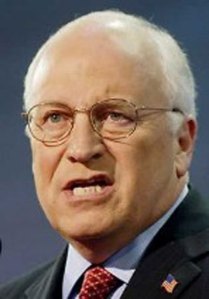 Every time I see former Vice-President Dick Cheney interviewed on any news program, national or otherwise, I think to myself, ‘Why is this man here and not facing a war crimes tribunal?’ Cheney made a remark during an interview with Jonathan Karl Sunday on ABC’s This Week, a remark made almost in passing, that once again brought that question to mind:

KARL: Did you more often win or lose those battles, especially as you got to the second term?

CHENEY: Well, I suppose it depends on which battle you’re talking about. I won some; I lost some. I can’t…

KARL: … waterboarding, clearly, what was your…

KARL: And you opposed the administration’s actions of doing away with waterboarding?

It never ceases to amaze me, although it’s not the first time it has happened and undoubtedly won’t be the last, that a former vice-president of the United States of America can openly and brazenly confess to something which the Geneva Conventions and the United Nations Convention Against Torture recognize as torture, something for which members of the Japanese military were punished after World War II. Torture, a punishable offense under U.S. Code 2340A by imprisonment or death. And he can do so without any fear of reprisal, thanks to the ‘look forward, not back’ policy of the Obama administration.

Andrew Sullivan at the Daily Dish calls on Attorney General Eric Holder to take action or be considered an accessory, also a punishable offense:

“…the attorney general of the United States is legally obliged to prosecute someone who has openly admitted such a war crime or be in violation of the Geneva Conventions and the UN Convention on Torture. For Eric Holder to ignore this duty subjects him too to prosecution. If the US government fails to enforce the provision against torture, the UN or a foreign court can initiate an investigation and prosecution.

These are not my opinions and they are not hyperbole. They are legal facts. Either this country is governed by the rule of law or it isn’t. Cheney’s clear admission of his central role in authorizing waterboarding and the clear evidence that such waterboarding did indeed take place means that prosecution must proceed.