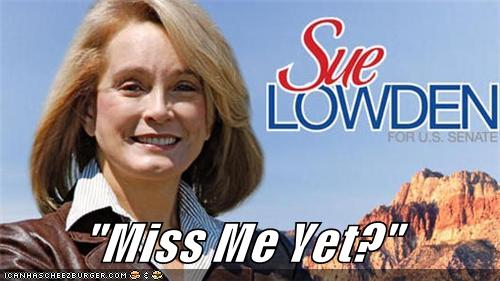 Nevada Republican Party to the Tea Party Express: Thanks a lot.

In the June 8 Senate Republican primary in Nevada, Tea Party darling Sharron Angle defeated Republican establishment candidate Sue “Chickens for Checkups” Lowden by a margin of 39%–28%. A June 11 Rasmussen poll showed Angle with a 50–39 edge over Senate Majority Leader Harry Reid. Then Angle started talking…and running from cameras. Now? The latest from Rasmussen has Reid up 45–43, and Nevada has changed from Toss-Up to Leans Democrat.

Some of the internals are interesting:

55% have at least a somewhat unfavorable opinion of Reid.

50% characterize his views as extreme.

But yet he has an overall lead. Howzat?

And if Rasmussen has Reid up by 2, you know his actual lead must be at least 6 or 7. Take note Tea Party candidates: Crazy can win the Republican Primary. The General Election, not so much.

Angle’s latest: In a radio interview today she was asked her thoughts about campaign finance regulation.

“Well I think that the Supreme Court has really made their decision on this, they found that we have a First Amendment right across the board that was violated by the McCain-Feingold Act. And that’s what they threw out, was those violations. The McCain-Feingold Act is still in place. The DISCLOSE Act is still in place. It’s just that certain provisions within that they found to be definitely violating the First Amendment. If we didn’t have the DISCLOSE Act there would be a lot of different things that people wouldn’t be able to find out.”

The DISCLOSE Act became the latest filibuster victim on Tuesday.