Ron Beasley at Newshoggers has the appropriate image of Senator Mitch McConnell in his post yesterday entitled, “If He Only Had a Brain” : 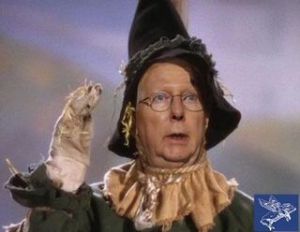 McConnell continues to mindlessly repeat Frank Luntz talking points about “endless taxpayer bailouts of Wall Street banks,” talking points written before there was an actual bill. Rachel Maddow compares the similarity, purely coincidental I’m sure, between Luntz’s “words to use” and McConnell’s statements:

I’m trying to imagine the conversation in Boehner’s office when the statement was being written. Which genius on Boehner’s staff discovered that the Obama administration is going after Goldman Sachs, regardless of its campaign contributions to Obama, and thought, “A ha! Now we’ve got ’em!“

I would guess that genius was the Orangeman himself.